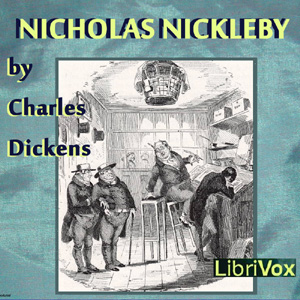 Nicholas Nickleby is a young Devonshire man of nineteen, handsome and hot headed, devoted to his sister Kate and his parents. Following the death of Nicholas’s father, they find themselves penniless, and travel to London to seek help from his uncle, Ralph Nickleby, a heartless, cunning rogue. He grudgingly finds employment for Nicholas in Dotheby Hall, a school in Yorkshire run by the brutal Mr. and Mrs. Wackford Squeers. Appalled at the condition and treatment of the school children, Nicholas rebels, escaping with Smike, a young man/child who has become devoted to him.

Meanwhile back in London, Ralph Nickleby uses his beautiful niece Kate to adorn dinner parties for his disreputable male clientele. He also acquires for her a position as a dressmaker, where she finds herself working under a despotic supervisor.

Nicholas, in search of employment, first tutors children of the Kenwigs family. Later he meets the flamboyant Mr. Vincent Crummles, and along with Smike, joins his theatrical troupe, with a band of hilarious actors. Among his many tasks, he creates posters, adapts scripts and acts in many productions.

Learning of Kate being in peril, he and Smike leave the troupe to come to her aid. Nicholas then meets with the wonderful Cheeryble brothers who help him start a new life with his family and Smike -- but Smike is captured by Wackford Squeers and returned to Dotheby Hall in Yorkshire. Nicholas goes to the school to rescue Smike, and faces off Mr.Squeers, in an unforgettable scene.

In the course of his many adventures, Nicholas falls in love, his sister Kate falls in love, and even the often dotty Mrs. Nickleby is courted by a strange man who flings vegetables to her as tokens of love.

Written when Dickens was himself a young man, Nicholas Nickleby is full of twists and turns, and adventures both merry and tragic, with, as always, many unforgettable characters. (Summary by Mil Nicholson)

Reviewer: Wizzerd56 - favoritefavoritefavoritefavoritefavorite - March 5, 2012
Subject: Mil Nicholson is the best yet!!
Mil is a great voice-actor, not just a reader! I enjoyed every minute of this recording. I loved the individual character voices and accents. I can't wait to listen to her other works.
Thank you,
A New Jersey, USA fan!

A truly great novel brilliantly interpreted by a wonderful voice artist. Mil's characterisation of Mrs. Nickleby (Nicholas' mother) is simply unmatched. I was just cracking up with laughter! And that John Browdie sounds more like a Geordie than a Yorkie, I put that down to the reader's artistic license (that's meant in fun, Mil, in case you're reading). This marathon 33 hour recording kept me company on many a drive up and down the old M6.

The talented reader seems to be working her way through Dickens -- and all I can say is "please miss, I want some more."

Uploaded by librivoxbooks on August 4, 2011